This is our latest newsletter.
You can sign up to get these every couple of weeks.

YEP!  That’s right: Season 2 starts in June!  Whitney, Daisy and I agreed on the dates just last Friday. I am having a great time working on this batch of stories-in-progress.

And it’s going a LOT more smoothly than last season, thanks in part to a group of librarians, archivists, and other beautiful nerds who helped me last summer and fall. 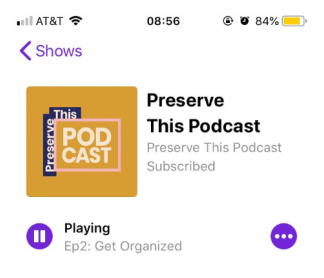 They’ve got a project called Preserve This Podcast, which starts with an unnerving (to me) premise: Stuff online does not stick around forever. Not all by itself.

They’re teaching podcasters like me how to archive our own stuff, and they’re doing it… via a podcast.

In the latest episode, Getting Organized, you can hear host Molly Schwartz teaching me how to keep my digital files orderly.

It’s pretty funny. As Molly says — and my mom can confirm —  I am “not the most organized person.”

BUT I LEARNED. Just in time, because this season’s first story involved an EPIC interview. I’m going to show you the folder structure I created for all the audio, because I’m so darn proud. And because I am a nerd.

Meanwhile, listen to the episode. Hearing me bumble my way through this — it’s hilarious.

Meanwhile, in the news…  maybe a little less funny…

Paying an arm and a leg to lose a foot — and re-learn a big lesson: Picking insurance is awful.

Actually, it’s worse than we knew...

A big theme in Season 2 is the incredible amount of adulting — vigilance, persistence, organization — that this system requires of us.

… well, here’s an example of how you’re not alone:

A professor in Philadelphia found out she needed her foot amputated to stop an infection from spreading. But, she thought, at least she had insurance.

Except, it turned out her insurance was junk — a short-term plan with a ton of exclusions —and it wasn’t going to cover the operation. Or anything related to her problem.

Sarah Gantz reported the story for the Philadelphia Inquirer (which has such a strong paywall you may not be able to read anything. With apologies to the Inquirer, here’s a summary published elsewhere.)

Gantz found herself having to defend her source. And she followed up with a new story. 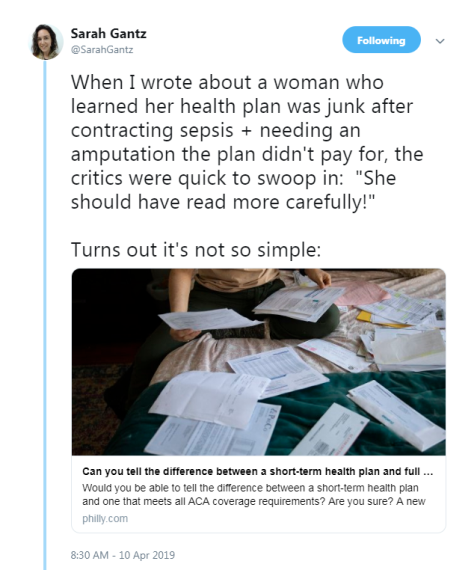 Remember our episode on why most of us will choose the wrong health plan?

Turns out, most of us are even worse at it than we thought. Sarah cites a study by the National Association of Insurance Commissioners:

The crazy part to me: These folks in the study spent an hour with the pamphlet. They did the reading. And still.

These were short-term plans — like the one the professor in Philadelphia had — which don’t comply with Affordable Care Act requirements to, you know, cover essential services.

Instead of ending on that note, I’ll just report how pleased I am to see that somebody else’s household is just excited for Avengers Endgame as ours:

Back in a couple weeks. Till then, take care of yourself.

An Arm and a Leg will be entertaining, empowering— even useful. As a reporter, I’ll bring my skill at finding and telling revealing, surprising stories. But the project’s big focus— since I’m in this mess too—is connecting and problem-solving, together.
END_OF_DOCUMENT_TOKEN_TO_BE_REPLACED The AWESOME Foundation is … a really, really lovely thing, powered by a simple idea, a website, and a bunch of wonderful people.

The idea: If ten people in a given place all agree to put up a hundred bucks a month, suddenly they’re a foundation! They can make thousand-dollar grants. As of this writing, people do this in 96 places around the world.

Including Chicago, where the local chapter’s trustees gave this project a thousand dollars last night. THANK YOU SO MUCH!  We will be putting that money to good use.